20 May3 Troubling Retirement Planning Statistics You Need To Know

There are 3 retirement planning statistics that trouble me the most – and investors need to know how to protect their golden years. 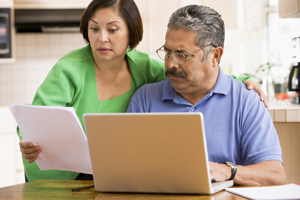 An economist I am not, but having seen 1/3 of investors’ assets disappear in several markets over the last 18 years I do know this: It’s the bond investors who get hurt the most.

They aren’t expecting it.  They think their allocation is safe because they own bonds.  Tech investors who lost big in 2000 knew, for the most part, the risks they were taking.  Bond investors in 2008 did NOT.

Short of the many bond valuation and statistics that are flooding the internet waves, I offer you Buffet-ology on bonds:

In terms of…bonds, some day they will sell the yield a whole lot more than they’re yielding now…I don’t know…when it’ll happen…the question is always when…but you could have interest rates very significantly different than what they are now, in some reasonable period in the future…I like owning stocks. I do not like owning bonds now. There could be conditions under which…we would own bonds, but they’re conditions far different than what exist now…You shouldn’t be 40% in bonds…I would have productive assets. I would favor those enormously over fixed dollar investments now, and I think it’s silly to have some ratio like 30 or 40 or 50% in bonds. They’re terrible investments now…I bought bonds back in…the early 80s…We made a lot of money and we bought zero coupon bonds…The price of everything determines its attractiveness…You’ve got some guy buying $85 billion a month…and that will change at some point. And when it changes, people could lose a lot of money if they’re in long-term bonds.

Most soon-to-be retirees NEED bonds in their portfolio, but more so when they occupy a higher rank in the asset scale.  Shift your bond holdings as relative strength suggests that deserve more attention.

We’re seeing some good signs that this bond “crisis” for portfolios may be shifting, but bond buyer/holder, beware.  The 10 Year Treasury hit a 2014 low, suggesting a trend that the market may support higher bond prices in the future.

Bottom line: Holding long-term bonds is a risky position. Make sure if you do own bonds that they’re short to medium term in duration and maturity.

Have you FULLY evaluated your Social Security options?  You could receive up to 76% more by waiting until age 70. But still, there are complex ways for married couples to max-out their preferred Social Security strategy.

It’s not as simple as both waiting until you’re 70.

Longevity is the key issue as it relates to Social Security strategy, and since no one really knows how long they will live, part of strategizing is more art than science.

Still, a great deal of retirees assume that if they wait until 70, they’ll ultimately collect more – and while the monthly check might be bigger, it may take 10-13 years to “break even” on total benefits received, as compared to taking a lower, earlier benefit.

The other side of the coin is that retirees assume that they should take at normal retirement age – the age at which they are first eligible (for most, its 66 right now).  This, also, could be a mistake.

Unfortunately, most don’t take the necessary steps to maximize this retirement asset.  If you don’t make the right decision about when to elect Social Security, you could be making huge financial mistake.

Typically speaking, with couples, the higher wage earner should file a restricted application for spousal benefits at 66/67 and then draw his/her own at age 70, while the lower earner simply draws their own at 66/67.

Bottom line, married or not:  Get good advice!  Check out this free tool – but at the end of the day, consult with Alphavest and get your free customized report to determine the best strategy for you.

How much do you pay in total fees on your investment portfolio?  If you don’t know, you’re not alone.

Only a very small percentage of investors understand what they’re paying thanks to the pervasive lack of transparency amongst Wall Street and Big Brokerage.  Research shows that paying .8%, per year (too much) can reduce your wealth by 21% over your retirement. NO ONE can afford losing 21% of their wealth to unnecessary fees.

Most times, you will have 2 if not 3 fees to be aware of;

1. Transactions
The cost of transactions, or trading.  This comes in the way of commissions for each trade, hidden charges from mutual fund and/or annuity companies that come right off the top of your initial investment (this crushes long-term returns due to the lack of future compounding of those now missing dollars), or an annual fee based on asset value for unlimited transactions.

2. Advisory
You may pay a “wrap” fee to an advisor to manage your account.

3. Investments
Unless your portfolio is 100% stocks and bonds held outright (not bond funds), you’re also paying an investment fee, per each investment.  ETFs and mutual funds can charge as little as .09% and as much as 3% or more, per year.

What are your total investment management fees on your investments? Click here for a free tool to help you analyze your fees or here for a customized Morningstar Fee Analysis.

Don’t become another retiree statistic.  Take the time to analyze the maturities of your bond holdings, and keep them low (under 12 years).  Request a free Social Security analysis to maximize how and when you and/or your spouse draws social security and above all, know what you are paying in investment fees – the TOTAL, and keep it well below 1.5%.

Want help?  Alphavest is Liberating investors every day.  Join the movement – the road to happy retirement is close at hand.

Tell us what most concerns you about retirement in the comments below.