It’s the most wonderful time of the year…unless you’re a mutual fund owner. In fact, December is the notorious time for 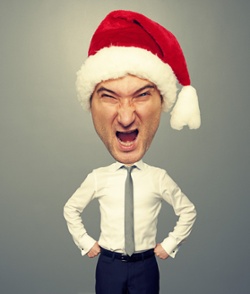 You see, at first blush, a capital gains distribution on a portfolio position sounds like a not so bad thing, right?

Not always, and especially when it comes to mutual funds.  I get that no one likes paying taxes, but who likes to pay taxes on someone else’s gains?  That’s right.  It’s possible, and happens every year, right about now.  Unsuspecting mutual fund owners can be distributed gains on a mutual fund that they own, yet the gains may not be theirs.

WHAT?  How in the world can this happen?

Easily. This egregious occurrence of paying someone else’s capital gains taxes is easiest to describe as it relates to new mutual fund purchases, but this tax goof can happen in many other instances.

For example, if you purchased a mutual fund, say an international fund (good example for 2014, actually – take a look at your holdings!) in March of 2014, it is VERY possible that you have a loss in that holding, year to date.  The problem arises when, say, the manager has owned Baidu, the Chinese version of Ebay, for example, since 2009 and sold it in February for a gain of  250%.  If you still hold this mutual fund when they distribute capital gains taxes, most likely in December, you WILL end up paying the taxes on this BIDU gain, and you never owned the fund when it held the stock.

Take a look at PIMCO. PIMCO International StocksPLUS AR Strategy Fund will distribute a 21% capital gain to shareholders of record, 12/9/2014.  It came as a shock to me that Bill Gross’ “gross” departure at PIMCO and the over $32B, yes Billion, in outflows that Pimco Total Return saw in October alone, doesn’t appear to be creating a large distribution this year, between .66% and 1.07% depending upon which version of Total Return you own. Shocking that meeting $32B in liquidations hasn’t resulted in more distributions to these shareholders.

The point is, had you bought the aforementioned international fund in March, you would have a loss for the year, yet you will be getting a tax bill for a 21% capital gain distribution if you don’t sell the fund before 12/9/2014.

While we don’t want to pick on PIMCO, American Funds may have a lump of coal or two coming your way in the way of double-digit distributions that you may have losses in with Investment Company of America, SmallCap World and Growth Fund of America.  Take a look!

Crazy, right? Paying taxes when you have a loss?

I have blogged often on the pitfalls of mutual fund ownership – and this capital gains distribution conundrum is the primary reason why.  I liken owning mutual funds to having a pet Dinosaur.  Big, clunky and (going) extinct.

Okay, so not a perfect choice of animal, since Dinosaurs are actually extinct, but you get the point.

I might add that buying a pet Dinosaur would be quite costly, I presume. And so are mutual funds, for the most part.

Exchange Traded Funds (ETFs) are the not-so-new mutual fund, with much better bells and whistles.  Consider ETF’s before mutual fund ownership whenever possible – as for starters, with an ETF you’ll only pay taxes on your own gains – NOT someone else’s.

In all seriousness, the unfair distributing of capital gains taxes that aren’t yours happens often.  Liberated Investors don’t pay other investors taxes.

So what can investors do?

Want a free, no obligation, Morningstar Analysis™ of your mutual fund holdings?  Get your customized capital gains distribution and mutual fund fee analysis, and make this the MOST wonderful time of the year.Forgo the coal and the tax man and dump those mutual fund holdings today.  My gift to you!