07 AprWhat can investors learn from Coach K and the Blue Devil champs?

What can investors learn from Coach K and the Blue Devil champs? Paying for a good coach, trusting fresh new talent, and removing the emotion from the game–this is the winning formula that investors can learn from.  Whether a Kentucky, Duke or Wisconsin fan, be a fan of your own and learn from the greatest coach of all time—he’s certainly proven the returns to Duke’s program since 1980. 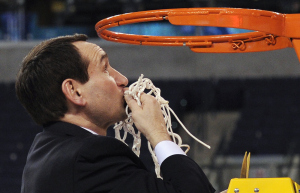 According to ESPN, an impressive  60 of Duke’s 68 points were scored by freshmen, setting a record for most freshmen-combined points in a title game.  A “fresh” start with a young team (and a PROVEN track record, of course) may be a wining formula for your Rollover IRA or that 401k plan left behind. If I recall correctly, all but 2 of the starting line were freshman.  Gray hair (albeit I’ve got mine…) isn’t needed for a winning portfolio—after all, somehow, amazingly, not even Coach K, at 68 has gray hair on his head. (Sylist’s name needed, thanks!)  I digress.

Pay for a good coach

I had to start with the less obvious of the 3 learning points.  Now on to the super obvious of having a super coach—but the less obvious in today’s fee conscious investment arena; Paying for it.  Top notch leadership, like that of Coach K, pays off.  5 NCAA wins in 35 years and revenues to the program of just north of $27 million during the 2013-2014 year, alone spells WORTH IT.  While some may criticize Coach K’s impressive $9M+ salary (OK, so its closer to $10M), on a relative basis, he’s been worth every penny and made the program a more than nice return, all the while changing the lives of his players, each and every year.

Shall you be conscious of what you pay an advisor: resoundingly, YES.  Will they win every year:  resoundingly NO.  But if you have a fee only adivsor who only has one interest in mind, WINNING—and they have a proven track record of winning a few games, and you genuinely believe they understand which game you want to win, pay them.  The freebie offers from Fidelity and Ameritrade abound—the free commissions and offers of 500-600 free trades (can you even conceive of 600 trades?!) come with a baggage, a great big gym bag filled with sweaty socks, deflated basketballs, poor returns, heartburn, anxiety and very little sleep.  Don’t get me wrong—BE FEE CONSCIOUS, but pay an advisor—Get a Coach K.  2015 will require this if you want to go the finals.

Remove emotion and ego in order to win

Finally, what would a good dose of investor advise be without the sermon on emotion and the stats of investor “bad behavior”? One needs to look no further than DALBAR’s annual study of Investor Bad Behavior to see the staggering under-performance by investors trying to time the market, due in large part to emotion or ego.

Per Dalbar, despite the fact that investors in 2013 “timed” the market correctly “75% of the time,” they still managed to under perform the broad markets by a staggering 6.87%.

Fox Sports reported today; “Coach K helped us flip an emotional switch (when Duke was down nine with 13 minutes left Monday),” senior Marshall Plumlee said. “He helped get our minds right. … From Day 1, everyone showed up and there were no egos in the locker room.  Everyone was just consumed with winning.”

Your portfolio can win, IF you remove the ego and emotion—most investors can’t and furthermore, most advisors DON’T.  What do I mean?  If you have an advisor that doesn’t have a rigid, disciplined game plan for navigating markets, good and bad, and rule book that helps them remove emotion and ego then get shopping for a fresh new start.

A final tid-bit I didn’t plan on including; NOTE the final game score: 63-68, a pretty low scoring game.  A strong and heavily defensive game.

You should do the same for your portfolio in 2015.  Don’t have a defensive game plan?  Pay an advisor that does, and a winner you’ll be.