DIY’ers (do-it-yourselfers), listen up…go the way of many this year and think about turning the page of managing your own investments. 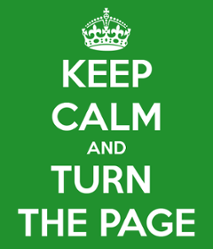 Yes, the waters are murky, but they’re clearer than they’ve been in awhile.  It’s clear that this is not the year to point and shoot and hope for good returns.  It’s clear, that if you are going to dip you toe into the pool of hiring an advisor, that you need a fee-only advisor so that you don’t get sold things you don’t need, or charged unreasonable fees or commissions.

So, it’s time–Keep calm and turn the page.

The State of the Union was filled with hot debate and topics from talks of tax increases on investments to, immigration reform and further action with ISIS, but specifically President Obama when referencing the hard economic times said, “But tonight, we turn the page.”

And so it seems the same is true at Davos.  As world leaders, top business people and campaigners gather to debate issues from climate change to political instability at the World Economic Forum this week in Davos, Switzerland a ‘turning of the page” theme seems to be emerging across the board with leaders from India, to China to the ECB offering a glimpse into tomorrow.  China could be excluded from the page turners as Li Keqiang, Premier of the People’s Republic of China, told attendees “The Chinese economy will face downward pressures in 2015″ but reassured that “…the Chinese economy will not head for a hard landing.”

One could certainly characterize QE of $1.1 trillion in $60 billion dollar installments by the ECB as a “turning of a page.”  Investors are so glad they did as evidenced with markets up 1.5% across the US board upon the announcement on January 21st.

And so it goes with perhaps a dawn of a new day for small caps.  Small caps may have turned the page from signaificant under-performance in 2014 visa vie that of the S&P 500, after outperforming the large-cap bellweather in 2012 and 2013 by nice margins. The Russell 2000 Index, a benchmark of small company stocks, returned a whooping 9.35% in Q4 of 2014, aside the S&P’s returns of 4.39%. Small caps, which when analyzed in the context of the month of January typically get mentioned in discussions about the “January Effect.”  The January effect, according to Investopedia,

“The January effect is said to affect small caps more than mid or large caps. This historical trend, however, has been less pronounced in recent years because the markets have adjusted for it. Another reason the January effect is now considered less important is that more people are using tax-sheltered retirement plans and therefore have no reason to sell at the end of the year for a tax loss.”

In any event, the January Effect isn’t proving very true in 2015, with small caps down about 1% YTD–  but if they can change course yet again and turn the page as they did in Q4, from under-performing their Large cap big brother, the S&P 500, to outperforming, now may be the time to increase your allocation in small caps.

But what else gets said about January, while we’re at it?  “January is a very good predictor if the market is up,” says Sam Stovall, chief investment strategist for Standard & Poor’s Equity Research Services. “Since World II, whenever January was up the market rose in the remaining months of the year about 85% of the time and it gained on average more than 11%.”But if the market is down in January “it’s a coin toss,” says Randy Frederick, managing director of trading and derivatives at Charles Schwab. “Since 1950, when January is down the year is up 48% of the time and down 48% of the time.”

So, February 1, we will turn the page on January, too, and given the stats above, for what they are worth, we’ll hope that January can eeck out a gain in January.  If not—turn even the page on this blog and make sure you quiet all the noise and stay true to a methodology that will steer you down an investing road that is straight and narrow—because the market won’t offer you anything straight in 2015—but narrow it will be.  Narrow in the sense that investors need to focus on outperforming asset classes and sectors and avoid the temptation to bottom fish.

Yes, 2015 will be a narrow market that President Obama, world leaders and yes, even small caps are going to make it difficult to navigate.  If you are a DIY (do-it-yourself) investor it’s time to turn the page.