05 DecDraghi and Oil A Drag On Markets, It’s Time To Do….Nothing

There was much speculation about whether or not European Central Bank (ECB) President Mario Draghi would announce Quantitative Easing (QE) in the near future to fight of the fears of deflation and sluggish growth in Europe at yesterday’s ECB meeting.

Ultimately it was decided to keep interest rates the same and to reassess early next year the idea of QE in Europe.

Most notably, the ECB tweeted these two statements made by Draghi at the meeting yesterday morning:

Draghi: Early next year we’ll reassess monetary stimulus achieved, the expansion of the balance sheet and the outlook for price developments

Draghi: We will also evaluate the broader impact of recent oil price developments on medium-term inflation trends in the euro area

As the Dow and the S&P hit record highs yesterday, oil prices and lack of ECB QE action is responsible for cautious optimism across most markets.

So what’s an investor to do with all the noise?

I found this great piece embracing the idea of do nothing until you have to do something. Here’s an excerpt on what Michael Covel had to say:

Phil Jackson’s 11 Principle’s of Mindful Leadership are worth reviewing, but #10 is the trend following creed:

10. When in Doubt, Do Nothing. “Basketball is an action sport, and most people involved in it are high-energy individuals who love to do something—anything—to solve problems. However, there are occasions when the best solution is to do absolutely nothing. I subscribe to the philosophy of the late Satchel Paige, who said, ‘Sometimes I sits and thinks, and sometimes I just sits.’”

Trend following = do nothing until you have to do something.

Dorsey Wright followed these Phil Jackson sentiments up perfectly with “Yes, investing is an action sport, just like basketball. Phil Jackson was notorious for not calling time out in the final minutes of a game and the results were favorable.  Similarly, when employing a relative strength strategy it can be advantageous to stay the course, only making changes when the longer-term relative signals suggest that change is warranted.

Dorsey Wright has some great stats to illustrate the benefits and frustrations of a relative strength strategy, much like that of what we use at Alphavest. Check out the below chart that illustrates Dorsey’s relative strength “DALI” strategies—BUT don’t get overwhelmed. 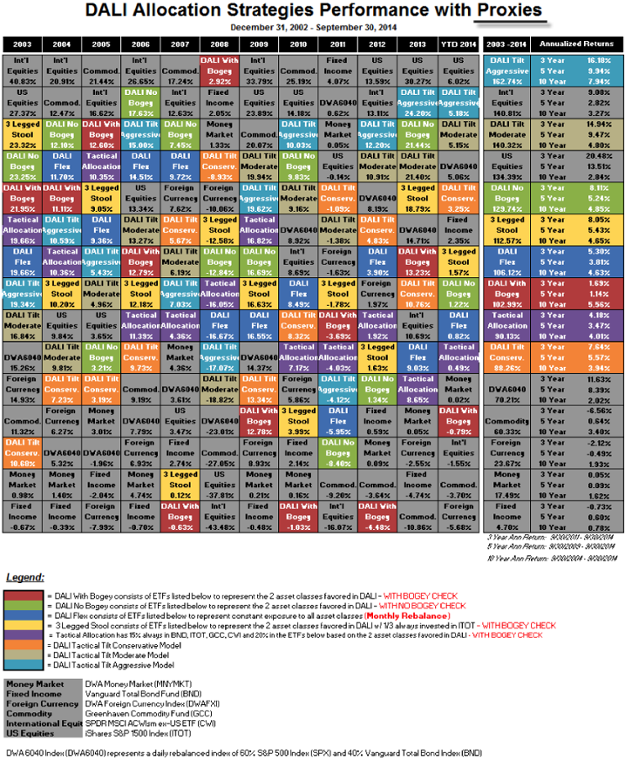 A relative strength strategy is not to be judged against the S&P 500 day in day out, but if the S&P is your yard-stick, as you see above–you’ll outperform in the end.

For now, be like Phil Jackson and Mario Draghi – stay the course and do nothing.  Quiet the noise.