For the fifth time in six weeks, domestic stock indexes ended last week in positive territory. The S&P 500 gained 0.24%, the NASDAQ added 0.67%, and the Dow eked out a 0.06% increase. International equities in the MSCI EAFE grew by a sizable 1.99%.

Over the week, we received a series of economic updates that gave a mostly positive view of the economy’s progression, including the following data for February:

In addition, the most recent data indicated that fewer people filed for unemployment benefits the week of March 11. We have now experienced 106 straight weeks of unemployment claims staying below 300,000 people, which is a healthy labor market indicator.

Given this information — and the wealth of economic data released recently — the markets expected the Federal Reserve’s March 15 decision to raise benchmark interest rates. Last week’s 0.25% increase is only the third jump since the Great Recession, and the pace of hikes is quickening.The Fed has now raised rates in December 2015, December 2016, and March 2017 and expects at least two more increases this year.

Like with all economic data, understanding the context is critical. While interest rates are on the rise, they are still low, as you can see in the chart below. 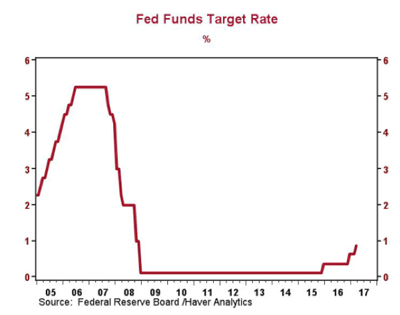 How will rising rates affect your financial life?

When the Fed raises rates, they are demonstrating a belief in the economy’s strength. As with all changes to monetary policy, the outcomes can be complex and interconnected. While no one can predict the future, here are a few places where interest rates may affect your finances:

1. Stocks — Stocks rose following the Fed’s announcement, with the S&P 500 gaining 0.84% on Wednesday. A strong economy is good for stocks; but anticipating exactly what lies ahead is impossible because so many outside forces impact equities. Right now, however, the markets are performing well and responding positively to increasing rates.

2. Bonds — Generally speaking, as interest rates rise, bond yields go up and their prices go down — with long-term bonds suffering the most. However, those are not hard-and-fast rules for how to move forward. Your specific needs and strategies will determine the best way to move forward with bonds in a rising interest rate environment.

3. Revolving Debt — If you have revolving debt-credit cards, home equity line of credit, etc. — and your interest rates are variable — you will likely see a difference in your payments very soon. In fact, a 0.25% increase like we experienced last week may cost consumers an additional $1.6 billion in credit-card finance charges in 2017 alone.