11 JanRocky Start for Markets in 2016, Math, NCAA Championship and More

A rocky start for markets in 2016. YUP. The worst first week of the year in trading history. DONE.

Note that even our most aggressive portfolios are outperforming YTD thanks to allocations to our HEDGE (short oil and holding cash, too), and FIXED models which are up .68% and .80% YTD versus -5.96% on the S&P 500.

Here’s what our stats gurus at Dorsey Wright have to say:

The first week of 2016 will go down in the history books, and unfortunately not with a positive connotation.  Friday was yet another down day, with the Dow falling over 100 points.  With respect to the S&P 500 SPX, it tumbled a painful 5.96%, making it the worst first five trading days of any year in history (for data going back to 1950). In the table below, we have displayed the worst first five-day stretches of January since 1950. In addition to 2016, the other historically bad first weeks came from years 2008, 1978, 1991, and 1962. Two of these years ended up being down years when all was said and done, while two managed gains despite a dismal first five days of trading.  So for those of you finding yourself muttering, “As the first week goes, so goes…” not all hope is lost yet, and ultimately only time will tell what the markets have in store for the remaining 51 weeks of 2016. As always we will continue to monitor our indicators and key charts to keep you abreast of any material developments from here. 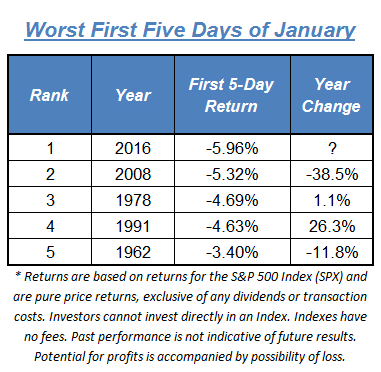 Let’s hope 2016 is a repeat of 1991.
Math and the NCAA National Championship, to Take Place TODAY in Phoenix:
Where were you on January 11, 1991?  I was a senior in high school in Tarpon Springs, FL reading my acceptance letter to Clemson University—Who, if the start of this year can stage a turn-around, is playing in the NCAA National Championship tonight in Phoenix, AZ. I am hopeful for a victory over Alabama’s, Crimson Tide.
I found the “math” part of the history of the NCAA Championship rather comforting– In that it evidences some depth to the madness of, men in tights.
Confession: I currently am at the “Natty” in Phoenix as I type this blog, so fair is fair, I am not opposed to men in tights. GO TIGERS! 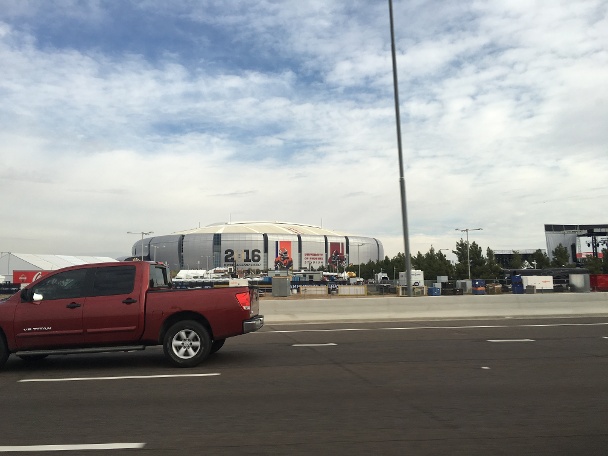 More on this day… Great segue from men in tights:
Alice Paul, a suffragist and women’s rights activist, would have turned 131 today. Her birthday is being celebrated with a Google Doodle.

She dedicated her life to securing equal rights for all women.

“Few individuals have had as much impact on American history as has Alice Paul. Her life symbolizes the long struggle for justice in the United States and around the world,” the Alice Paul Institute says. “Her vision was the ordinary notion that women and men should be equal partners in society.”

Here’s what you need to know about Alice Paul. You go GIRL!

On this day, 2 years ago; my oldest daughter, Helen Simons “HS” Berenyi, became the youngest woman in America to summit Mount Kilimanjaro, the tallest peak in Africa.

Icing on the cake– The Berenyi’s kicked off 2016 by summiting Mount Kilimanjaro on the 4th of January. My husband and youngest daughter, Jackie, were accompanied by She CLIMBS.org and myself to the top.

Markets come and go–what’s going to be your most memorable aspect of 2016? 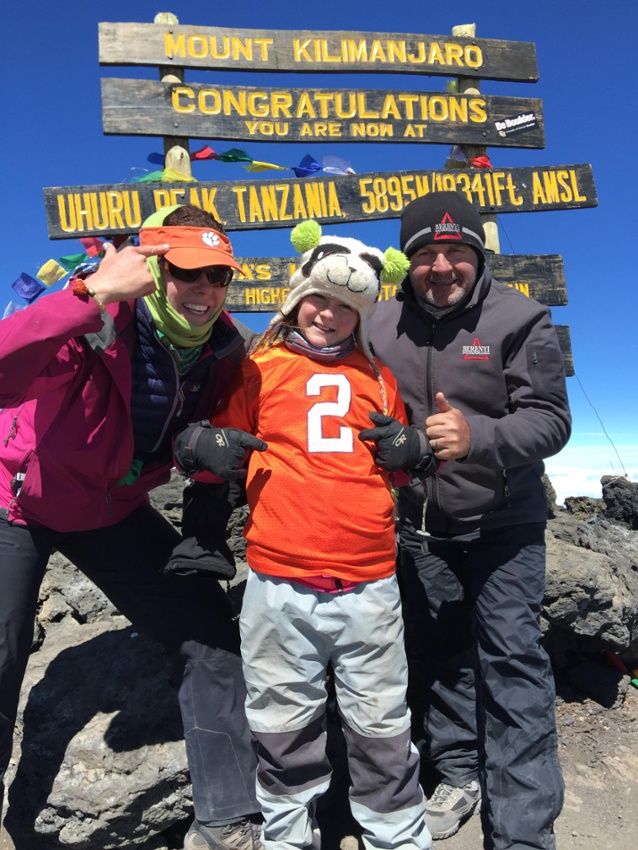