Early last week, both the S&P and NASDAQ recorded all time highs before tumbling along with the Dow as political concerns rose. By Friday, though, the markets had largely rebounded and steadied. The S&P 500 closed the week down 0.38%, the Dow saw a 0.44% loss, and the NASDAQ reported a 0.61% decline. The MSCI EAFE reported up 0.79% for the week.

The CBOE VIX is designed to measure market volatility by using S&P 500 put and call index option prices. For most of the year, volatility in the markets has been low. However, the CBOE Volatility Index (VIX) spiked 40% midweek before falling back by week’s end, indicating a possible increase in market volatility.

Through the week’s ups and downs, investors followed some other important economic developments.

Strong Corporate Earnings: With 90% of S&P 500 company Q1 earnings reports in, the earnings growth rate for S&P 500 companies remains bright with an average increase of 13.6%. The softening U.S. dollar – down 5% so far in 2017 – is helping companies that sell overseas. A weaker dollar will help companies with foreign earnings, as those earnings are more valuable when converted into U.S. dollars.

Mixed Housing Reports: New home sales remained strong as the housing market index rose 2 points to 70. The data came out well ahead of the 65-69 consensus range. However, April housing starts were lower than expected. Housing starts are now at a 1.172 million annualized rate, after falling 2.6%. 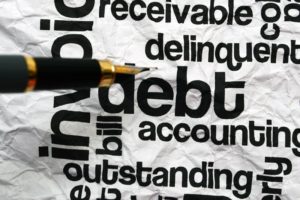 Total household debt rose to a new high, reporting a $149 billion increase to come in at $12.73 trillion. Student loans and auto loans were major contributors to the rising debt:

Economy: Manufacturing output rose 1.0 percent in April, the strongest monthly result in over three years. As such, investors will track how the rest of the second quarter shakes out. In addition, we will be interested in this week’s housing reports, hoping for a better handle on where this up-and-down sector is heading.

Geopolitical: Financial markets could experience some headwinds as geopolitical situations fester. Concerns over North Korea and political opposition to globalization remain. In addition, Brazil is facing political disruption and a deep recession that could mean problems for companies with business interests in that country. Similarly, continuing political challenges for the current U.S. administration may adversely affect proposed tax reform, health-care legislation, and infrastructure initiatives.