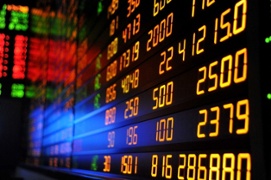 Stocks ended the holiday-shortened week down, snapping their five-week winning streak. However, losses were mild amid low trading volume before the Easter weekend. For the week, the S&P 500 lost 0.67%, the Dow fell 0.49%, and the NASDAQ dropped 0.46%.[1]

Last week’s economic calendar was highlighted by the third estimate of fourth-quarter 2015 economic growth. The report showed that Gross Domestic Product grew much faster than originally thought- by a 1.4% annualized rate instead of 1.0%. For all of 2015, the economy grew by a respectable 2.4%- not too shabby considering the headwinds the country faced down last year.[2]

The revision reflected much stronger consumer spending than originally thought, which is a relief to recession-watchers and could bode well for the economy in 2016. Spending is being supported by a strong labor market and low gas prices. However, the news isn’t all rosy. Business inventories were revised lower, showing that companies are reluctant to tie up cash in the face of uncertain demand. Since stockpiles are still high, it’s possible that weak business spending will eat into economic growth in the first quarter.[3]

Can we trust GDP estimates? That interesting question was recently brought up by a CNBC report, which found that GDP growth estimates could be off by as much as 1.3%.[4] When growth rates are already low, such a large margin of error (if it exists) could have serious business and policy implications.

A large part of the problem may be that many reports used by federal economists to calculate GDP arrive months-even a year-after the initial reports on economic growth go out, forcing them to use estimates. As these reports come in, economists revise the data, long after the relevant quarter matters to investors and policy makers. It’s often a question of trading accuracy for timeliness. That’s one of the reasons why we look at many different indicators and must understand the limitations of each one when we create models.

A vicious bombing attack on Tuesday killed at least 30 people in Brussels, putting the European Union capital on lockdown. Major cities around the world are bolstering security around transportation hubs in response.[5] The attack brings attention to the ongoing threat of terrorism and highlights the problems Europe is having in sharing intelligence and tracking suspected terrorists. Our thoughts are with the victims and their families.

Looking at the week ahead, we can expect some volatility as investors react to last week’s GDP report, which was released during Friday’s market holiday. While investors may react positively to the better-than-expected growth, we may also see some market turmoil ahead of the end of the quarter. The question is: Did the first quarter of 2016 deliver on expectations?.

Durable goods orders fall. Orders for long-lasting factory goods like appliances and vehicles fell in February by 2.8%. The data shows that the manufacturing sector is still struggling with falling demand.[6]

Weekly jobless claims rise modestly. The number of Americans filing new claims for unemployment benefits rose by 6,000, though revisions to prior week claims show that the labor market was stronger than expected.[7]

Q4 corporate profits down 3.2%. A measure of after-tax corporate profits shows that the overall bottom line for U.S. companies declined 3.2% over the previous year, held down by results from petroleum and chemical industries.[8]

New home sales rise in February. Sales of newly built homes rose last month; however, the increase was concentrated in a single region, suggesting the growth is not widespread as the busy Spring season takes off.[9]